The source code is contained in the following directories:

Adding and Removing Words from the User Dictionary

To remove a word from the user dictionary, the UserDictionary.RemoveWord method is used:

The following screenshot shows the interface of the sample application: 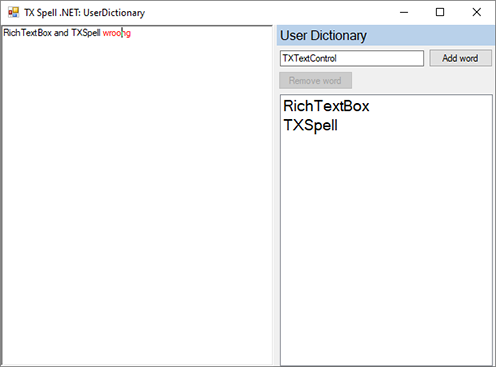 Both dictionaries of type OpenOfficeDictionary and UserDictionary support flags that provide specific settings to interpret the incoming string when spell checking text. For a user dictionary the flags SET, WORDCHARS, BREAK and ICONV are handled when defined at the beginning of the loaded user dictionary file or string array. When using these flags, they have to be defined as follows:

In some cases the text to spell check contains characters that are related but not equal to a character that is part of the dictionary's word list. To handle that character anyway, the ICONV flag can be specified. That flag is followed by two characters, where the first one represents the character that has to be replaced by the second character before spell checking a word.

As follows the beginning of a sample user dictionary is shown that includes all introduced flags:

The defined flags of that dictionary determines that its word list has to be loaded with the UTF-8 encoding (represented by the SET flag). Furthermore the characters ''-+.- are specified as additional word (WORDCHARS) and delimiter (BREAK) characters. The both ICONV flags determines that the character ' has to be replaced by ' and the character - by - before spell checking a string. When spell checking the text That text doesn't include the hyphen-minus character '-'. with that dictionary, no incorrect words will be detected. Without determining the flags WORDCHARS, BREAK and ICONV, the strings doesn't, hyphen and minus are identified as misspelled words.